Mac and Cheese is definitely one of our favorite foods. But we’re willing to bet you’ve never realized that it pairs really well with wine. In fact, Dan’s Gourmet offers a recommended wine pairing on the back of each of their flavors? The Plain Jane pairs well with a Sauvignon Blanc, while the Mediterranean flavors of their Krazy Kale go best with a Chardonnay. Come see us on Wednesday and see what other pairings we come up with! 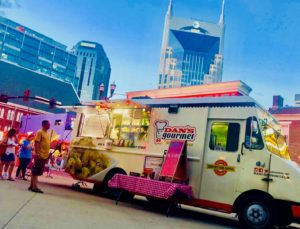 Growing up in Cleveland, Ohio, Dan Stephenson’s passion for creating food began as a child when he and his brother would compete to create their favorite dish, mac & cheese.  Dan can recall scouring his family’s refrigerator for unique ingredients to add to his mac & cheese concoctions.  This is where his love for creating unique flavor combinations in everyday dishes began.

After graduating Vanderbilt University with a degree in Economics and a minor in Corporate Strategy, Dan went on to work for Reagan-economist, Art Laffer and later Ingram Industries in Nashville. During his corporate journey, he continued to innovate and experiment with food and share his culinary creations with friends and family.  While Dan always had a love for creating food, he also “hungered” to start his own business and become an entrepreneur.

What initially began as a casual dinner for his girlfriend ultimately became the “Mac Attack” that he sold to thousands in local farmers markets in Nashville.  As the popularity of the “Mac Pacs” grew, he created other flavor profiles and so began Dan’s Gourmet and his line of Mac & Cheeses and the Mac Attack Food Truck.